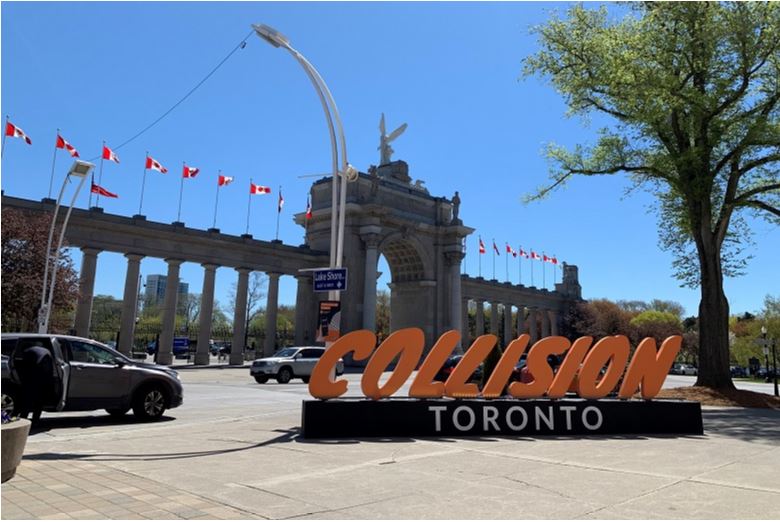 This past week, Toronto played host to thousands of tech industry leaders, movers and shakers at the 2019 Collision Conference. With over 700 speakers, over 25K attendees from over 125 countries, over 1K start ups, and hundreds of exhibitors and investors, the conference is considered the fastest growing tech conference in North America according to Inc. Magazine. Overwhelming is one word to describe the event but it was also exciting, inspiring and left us with more than enough fuel to move us at lightning speed towards the future.

Guest speakers and panels took to several stages throughout the conference. Literally something for every interest from mental health, cannabis, sneakerheads, music and entertainment, and small business to corporations. So much to absorb in so little time. Here are some of my favourite quotes from the conference…

We just want to start by thanking the Prime Minister for being our opening act. That was very nice of him. We asked for someone good hoping maybe Rush but then they got the Prime Minister and he killed it. So, thank you very much…we’ll open for him in return anytime he wants.

Education is something that in order to create customers that trust us more and the brand that we are proud of and again, is trusted, we’re trying to not just hopefully have a good product that is pretty but also to let people understand how to use it in a way that is most conducive to their enjoyment.

Creativity can be difficult. Where you hit that joy, that kind of flow state is not when you’re focused on the red carpets and the attention at the box office. I do think that a lot of social media platforms today, they really emphasize the attention. What are your goals? You can get followers. You can get likes. When you set out to make something whether it’s a song, short film, story or whatever, and your ultimate path is going to be posting on one of these platforms, then you go through in your mind and you start thinking while you’re in the middle of writing or singing whatever — Is this going to get a lot of likes? Or how many followers is this going to get me? … I think that’s not really good for the creative process.

When inspiration is not coming, you just walk away from it. I don’t try to get frustrated with it. Because I don’t like to be beaten.

Quality is usually easy to define. But creativity is more ethereal. It’s that critical spark essential for delighting and entertaining. There is no recipe for creativity, you can’t force it. It has to almost magically occur.

The moment I can’t enjoy my personal life and I can’t find peace is the moment I know something is going wrong…Every Thursday afternoon I go back home, and I don’t have my phone, I don’t have my computer. I just have my notebook. The only goal is to think about what I’m not thinking about.

Sometimes I might cross a line with a joke, and then my followers will let me know. But that’s kind of cool, it’s almost mirroring doing live stand up. Because you get that instant feedback. Usually they are laughing with me, sometimes they’re not.

Attention wins. Period. The cheapest way you can generate attention, which is the same reason that reality TV dominated, change the business model. People talk about saving publishing or saving news. How about we create something way better?

You’re coming in as the underdog. So that fear? You have to delete that fear. You got to come into anything you decide to do completely fearless.

You know, there was a time when we all believed that the camera didn’t lie, that what was in an image truly happened. But that all changed with the advent of Photoshop and other digital image manipulation tools and as a society, we no longer trust photos.

– Derren Hendler of Digital Domain (The Rise of the Digital Humans)

One of the really interesting things Toronto has in common with many of the great cities of the world, is that they’re struggling with the success. Cities that are growing have to be able to accommodate the growth and what we’re seeing here in Toronto is that affordability is a huge problem. People who don’t have money are getting pushed further and further away from centres of opportunity.

When I see Pokemon Go, I also see training wheels for augmented reality, as in, it’s this kind of augmented reality experience that is training people to understand that they can augment their view space with real time 3D imagery to make the world better and to have fun. Just imagine when this can power education, social aspects, learning navigation so we can bring stories to the real world. It is the silent revolution that’s happening. It’s technology that’s already here.

– Clive Downie of Unity Technology (Adapt or Get Left Behind)

Sonya is an established lifestyle writer based in Toronto with a strong interest in how technology is incorporated into the everyday. She’s passionate about the story behind the scenes and will also report on special events and launches. Her passions include family, arts, food, and travel. Sonya also contributes to several media outlets nationally.