With Lyft, Uber, and Fiverr all going public in the past couple months, it may look like the gig economy is gaining steam like never before. However, for dockless e-scooter company Bird, its international expansion brings with it the beginning of the end of gig economy workers at the company.

The company announced their launch would begin in Alberta. Lyons said to Tech Daily this choice was due to Alberta’s progressive stance on altering local laws. The executive said that provinces would need to amend their old highway acts to allow scooters on roads, something that Alberta seems more keen to do than BC or Ontario, where Lyons said the company is facing regulatory hurdles.

Ever optimistic, though, Lyons said the company is “weeks away, not months” from launching in Alberta, both in Calgary and Edmonton, and not too far off from other cities as well. Lyons hopes that Bird will launch in Montreal before the summer is out.

Other cities where Bird is looking to launch include Toronto and Vancouver, but he said the two cities are not moving as fast to change regulations. Across Canada, Kelowna, BC, and Saskatoon, Saskatchewan have “raised their hands” to launch Bird.

Bird’s dockless scooters present an interesting dual challenge for cities that docked bikes (like Bike Share Toronto) don’t have to deal with: scooters can be left anywhere when someone is done, including on busy sidewalks, and scooters can run out of battery since there’s no dock to charge them on.

Bird initially tackled this dual problem through the gig economy with Bird Chargers. A fancy splash page for Bird Chargers advertised that you could work on your own terms and set your own hours, getting paid daily to collect Bird Scooters and charge them in your home. Chargers would remove Birds from their area and keep them safe, charging them in their residences. The Chargers would then put the scooters back out the next day, presumably in an orderly fashion to make it easy for riders to access them.

According to Lyons, this is not how the program played out.

Too many people were gaming the system. People were hoarding scooters… it became a bit of a mess for Bird to operate, said Lyons.

Now, Lyons said the whole company is “moving away” from the gig economy model for chargers, preferring permanent workers, whether “contract or full-time workers.” Canada, for example, will not see the Bird Chargers program at all in its current incarnation – the company will move to have permanent “chargers” on their staff.

Bird’s other program for entrepreneurially minded people is Bird Platform, a franchise-style model that allows entrepreneurs to run their own Bird locale. Platform users get access to Bird technology, scooters, and brand to run in cities around the world. In fact, Bird Canada is a Platform company, with Bird Canada being a separately registered, Canadian business. The company received all its funding from Canadian sources, according to its press release, and counts among its backers the founder of the Toronto Raptors franchise. 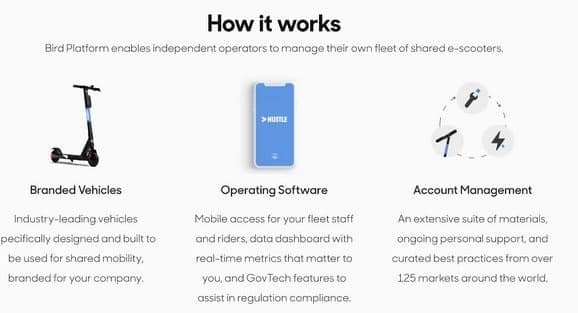 Lyons said that the Platform model is great because it encourages local entrepreneurship. With Platform, entrepreneurs buy scooters at cost and pay Bird a percentage fee from revenue, but otherwise the company is locally run.