How Maayan Ziv is taking over a $25B underserved market 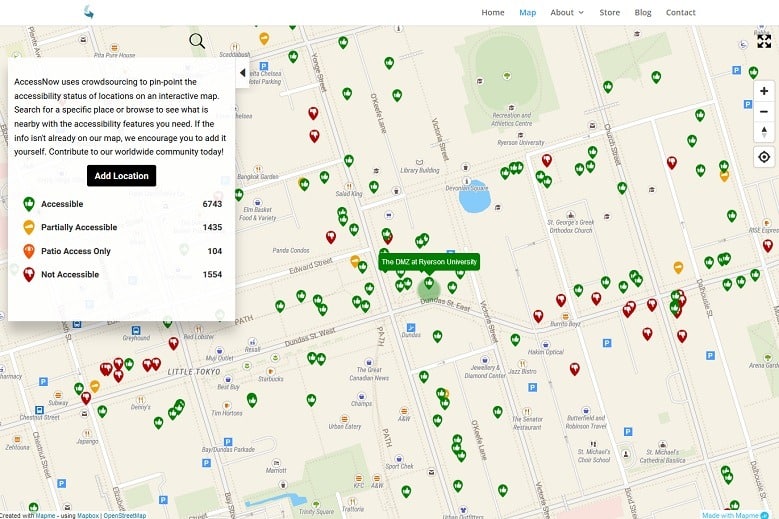 More than four million Canadians live with a disability. Because many buildings and public spaces were built without accessibility in mind for people who use wheelchairs or other assistive devices, those four million people are unable to live life to the fullest. Maayan Ziv uses a power chair to assist her mobility and knows this problem all too well. But once she realized how many other people faced similar issues to her, she knew she needed to do something about it.

Now, four years after founding her company AccessNow, a mapping application that ranks buildings for accessibility features, the company announced it received $2.7 million in funding to continue their mission. In an event at Toronto’s Ryerson DMZ – the place where Ziv founded AccessNow – government officials, corporate partners, and Ziv shared the founding story of AccessNow and how the company is taking on a multi-billion dollar underserved market.

Memorizing cracks in the sidewalk

Ziv explained to the audience what it’s like living with a disability. She “memorized cracks in the sidewalk” so she could avoid them with her chair and not get hurt. She had to remember which buildings were accessible and which restaurants have accessible bathrooms. Her entire life was spent figuring out how and where she could exist.

But then she realized she wasn’t alone – every other person with a disability had a similar experience. So when AccessNow was founded, it was done with community building in mind. The map application invited users to submit accessibility features and rankings for buildings in their area. It was slow at first, but it grew to thousands of buildings around the world.

With the new investment, Ziv plans to continue building a technology platform powered by community.

She said the money would go first and foremost to technology investments that make the app more usable.

The company is looking to build “a smart platform to rank places by accessibility, enabling people of all abilities to find their unique and personal accessibility lifestyles,” said Ziv.

The Minister of Public Services, Procurement, and Accessibility, Carla Qualtrough, who made the announcement of AccessNow’s funding, said that studies found Canadians with disabilities have $25 billion in disposable income each year. Much of these dollars go unspent because of the lack of accessible options in the travel, tourism, and hospitality space. AccessNow has an opportunity to change that.

With the investment in technology and community building, Ziv sees an opportunity for partnerships. The third item on her investment list, Ziv said she wants to partner with global companies to map all of their offices. If this goes well, the initiative could contribute to recruiting and retention of candidates with disabilities. But it also goes further than that. Ziv said AccessNow is “building product integrations to expand the ecosystem of accessible products and services” for people with disabilities.

“We can work with hotels, retail, travel, tourism… anywhere you might go, do something, or pay for something,” she said.

AccessNow began as many companies do – solving the problems of the founder. But AccessNow grew into a global community. On the back of this investment, Ziv hopes to build AccessNow into a global ecosystem for people with disabilities, representing a $25 billion dollar market in Canada alone. But more than that, Ziv hopes to change the conversation around accessibility.

“Accessibility has always been presented to me as something awkward that only people with disabilities are involved in,” said Ziv in an opening video for the event. “But accessibility is not a specific fix to a problem. It’s really a mindset that, when you tap into, can truly lead to a very powerful sense of inclusion.”