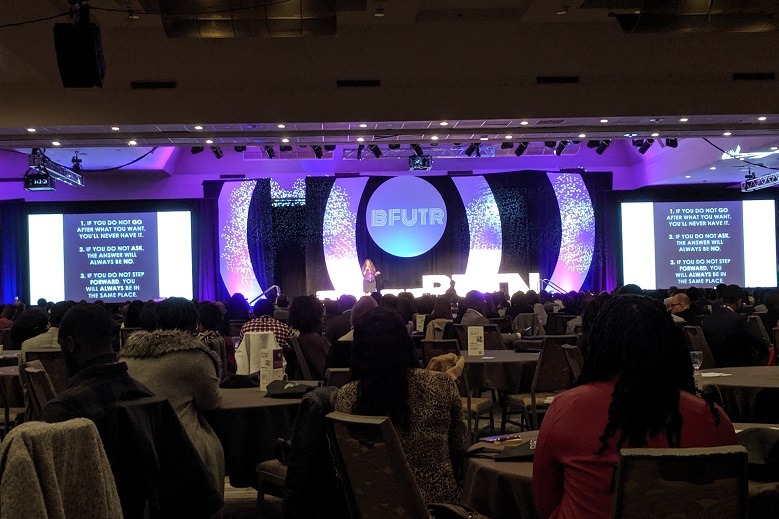 When the Black Professionals in Tech Network (BPTN) set out to launch a summit, they planned for it to be big. It seems those plans came to fruition. The inaugural #BFUTR by BPTN summit took place in Toronto and welcomed over 1,000 attendees including c-level executives from the big banks, venture capitalists from across North America, and Toronto Mayor John Tory.

BPTN is a community of Black professionals, and the audience in the room reflected that. However, for a community that’s often overlooked in the tech industry, #BFUTR showed that Black people are not only present, but engaged. Speakers covered a wide range of topics, but all the lessons are widely applicable, regardless of your identity. Here are the four key takeaways from the summit.

The opening keynote for the conference was given by Joseph Bradley, the VP of Incubation Services and Technology at Cisco. He spoke about the importance of harnessing your power as an individual and using technology to help you scale your work.

In particular, he focused on what he sees as the three sources of power that leaders have access to:

Regarding time, he stressed that “all things are important, but they are not equal,” highlighting the importance of prioritization if you’re going to achieve anything worthwhile. Money was a topic he left on the side, noting that you either have it or you don’t – but he didn’t want it to be a hindrance for people who didn’t have it because you can compensate for a lack of money with time and momentum.

Momentum, he said, is the most important thing. And speeding up momentum should be priority number one for anyone who wants to get ahead. Whether entrepreneur, employee, activist, or something else, building and sustaining momentum is what brings success.

“It’s not about failing fast or failing slow,” said Bradley. “It’s about accelerating your rate of learning.”

Seek people different than you

When Claudette McGowan, the CIO for Enterprise Technology and Employee Experience at BMO, started her keynote address at the summit, she talked about the boardroom table.

If your boardroom table looks like your dinner table – everyone similar – McGowan said you won’t find success in a rapidly changing world. Instead, leaders need to seek difference in all forms and champion people to become their own advocate.

“Sometimes people don’t feel safe to speak up,” said McGowan, adding that in those cases leaders have to encourage those people to speak up, demonstrating that they will support them.

In her talk, McGowan introduced what she calls her Creative Leadership Model.

Only then can you get done what you need to.

Stay hungry and be proactive

Arlan Hamilton is a well-known American venture capitalist, famous for her story of being homeless while raising her round from top tier Silicon Valley investors like Andressen Horowitz. She spoke about being “hungry, but not thirsty,” encouraging the audience to focus on what they want to achieve in life.

Being “hungry,” said Hamilton, is about having passion and drive for long-term changes. It also means not giving up, even when it may be easy or more comfortable in the short term. Giving up for short term comfort is how Hamilton defines being “thirsty,” where your need for short-term comfort takes over your desire for long-term benefit.

On the sponsor side, companies echoed this sentiment of doing the harder work because it provides better long-term growth. Sponsors like Opencare, RBC, TD, and more spoke about the need to be proactive in reaching out to different communities. While they specifically talked about the Black community at the Summit, the organizations shared that marketing and talent strategies require specific community reach out and engagement.

During the Summit, Mayor Tory joined BPTN founder Lekan Olawoye on stage for the announcement of BPTN’s expansion. Not only will the organization host the Summit again in 2020, with hopes of an even bigger audience, it will also expand its geographical presence into the United States, heading to Atlanta and other cities for meetups and further community building.