#movethedial Summit challenged attendees to be ‘agents of change’ 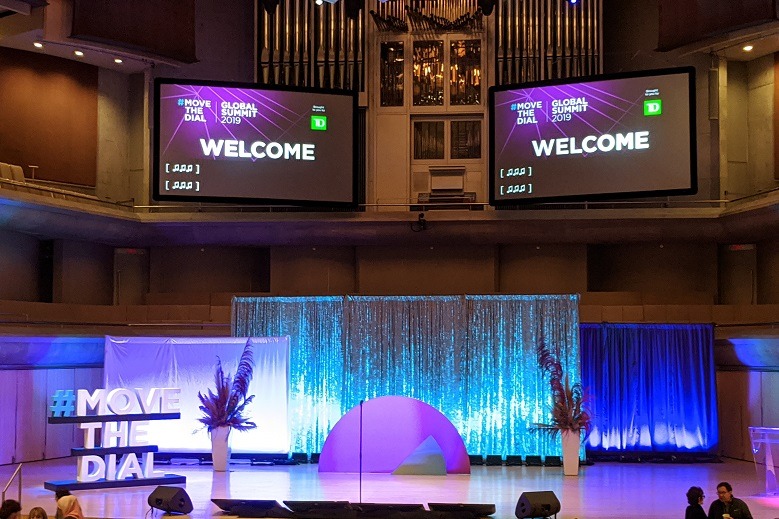 When Jodi Kovitz was 40, she found herself in a series of new things. She was a newly single mom in a new job in the tech industry, another “new” for the woman used to working at a law firm. She saw at one event that, of over 100 people, there were only four women there. Quick to note that the hundred some-odd men were very welcoming and accommodating, it was her own feeling that she didn’t belong that brought her down. There was no one that looked like her. So she hosted what was supposed to be a singular event to welcome more women into tech, and called it Move The Dial.

A couple years later, that single event spawned into a global movement, with dozens of events around the world all culminating the global summit, which took place in Toronto. At the summit, speakers shared statistics and stories about inclusion, building businesses, and more. But one message rang throughout the day: make the change you want to see in the world.

While many conversations were literal, focusing on statistics like how gender diversity leads to increased profits, there was a metaphorical undercurrent at the event. This undercurrent looked at the imagined business board room. The room only filled with people who don’t look like you. And “you” doesn’t necessarily mean being a woman – it simply means that you’re different from the people in charge. That feeling of difference can stop you from wanting to walk into the room, fearful that people won’t respect you. Speakers encouraged attendees to walk in anyway, noting that they only got to their positions of power because they walked in.

Farrah Nasser, an award-winning journalist and anchor with Global TV, told the story about how she was put up for a promotion at the same time that she got pregnant. While she would need a couple accommodations, she was clear with her employer that she wanted the promotion and would balance her life and her work.

Kathleen Taylor, the Chair of the Board for RBC, echoed Nasser’s sentiments about being clear about what you want and what you need. She shared the various struggles throughout her career, noting that the only time she overcame hurdles is when she walked into a room she didn’t “fit” in and asked for (or took) a seat at the table anyway.

“We have to fight hard for our seat at the table,” said Taylor. We have to really, really push for our voices to be heard. We have to have the tenacity to ask – and ask again.”

Kovitz added to these views and said that “good intention is not enough. If you want to impact change and change an ecosystem, you need to be intentional, not just have good intentions.”

Build what you need

Panels happened throughout the day on topics like imposter syndrome, fundraising, hiring and retaining more women, and launching a business. One fireside chat that focused purely on the business side was with Dragon’s Den star (and Clearbanc co-founder) Michele Romanow.

Her fireside focused on grit and resilience, which most entrepreneurial stories do, but added another dimension: building what you need.

Clearbanc is a funding provider for startups, and any time Romanow speaks about the company she echoes the same sentiment: it was the type of funding she wished she had as an entrepreneur.

The lesson she shared with attendees, whether entrepreneur or employee, was to build what you needed. If there’s a gap in your organization that’s stopping you from getting ahead, go build it (or work with your team to get it built). You don’t have to work alone, but you have to build your own momentum. When that happens, you can get much more done than you ever thought possible.

Over 2,000 attendees went to the #movethedial summit and over 100 speakers shared their messages. Throughout the event, though, were multiple different spaces for people to connect, unwind, recharge, or get invigorated. The stages housed content, but the meditation spaces, food areas, and quiet rooms gave attendees the space they needed to keep going all day.

A similar lesson can extend into the business world. Creating different kinds of spaces, particularly with research coming out about the crapshoot that is the open office, is a major way to move the dial in your business. And, funnily enough, it makes the physical office environment more inclusive.