Home Fintech Clearbanc is not a bank, but it will fund your startup
Fintech

Clearbanc is not a bank, but it will fund your startup 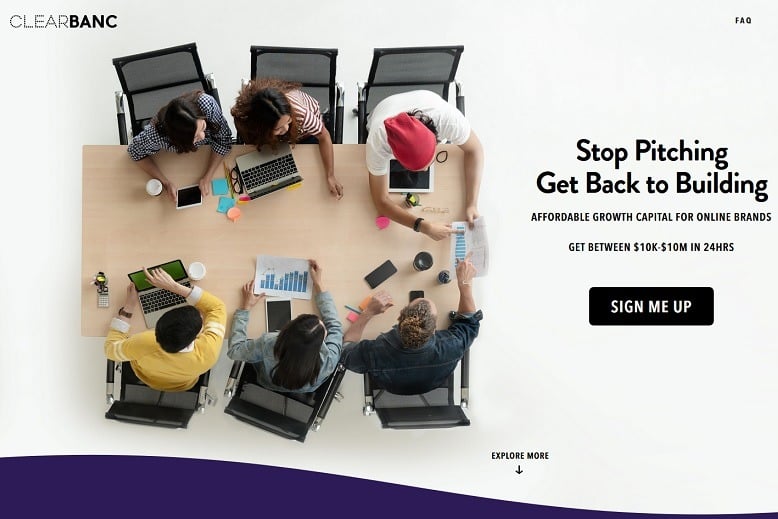 The world of fundraising for business is a mess, but nearly every company has to raise money at some point. Whether to buy some new materials, expand into a new market, or fuel marketing and sales, businesses need cash. When revenues are not high enough to fund the growth you want, you look elsewhere.

Unfortunately, business funding is filled with bad actors, annoying bank practices, and requirements of personal guarantees. Enter Clearbanc. The Toronto-founded company built a revenue-sharing funding product where businesses can get money in days, not weeks, and only pay it back when they generate sales.

Founded by entrepreneur Michele Romanow and a team of co-founders, Clearbanc made headlines in global business media for raising hundreds of millions of dollars. It’s grabbing the attention of founders and CEOs around the world, leading to its model being loved (and questioned) by many. But how does Clearbanc actually work? How can it impact your business – and does it even matter for your business? Tech Daily dug into some specifics about how Clearbanc works for business owners.

Clearbanc originally started as revenue-based funding for Airbnb hosts and Uber drivers. The thought behind it was simple: buying a new couch or bed directly correlated to more revenues on Airbnb. Buying a car upgrade meant more opportunity to make money on Uber. If Clearbanc could help people fund revenue-generating initiatives, the loan would be paid back in full with a much lower default risk.

That plan has since changed, but only a bit.

Clearbanc still focuses on revenue-generating investments, but the company evolved from the sharing economy to web-powered businesses. So if you’re in the e-commerce or SaaS business, Clearbanc wants to fund your marketing and sales spend. Romanow frequently says equity should not be used for marketing spend, but it still is.

Rant time! I'm sick of banks, venture debt firms, and crown corporations with a mission to fund entrepreneurs talking about how they exist solely to help great ideas get off the ground – but in reality, make it nearly impossible to get money until you hit it big.

“Equity is the most expensive way to fund digital ad spend and repeatable growth. So we created something new,” Romanow said in a TechCrunch interview.

The connection to revenue makes Clearbanc like a fixed income fund over a venture capital fund, something co-founder Andrew D’Souza noted in an Axios interview. But it makes perfect sense when the unit economics are correct. For example, if something costs $10 to make and you spend $5 to market it on Facebook for a $25 sale, you know you have a profit. So even after Clearbanc’s cut, you profit.

How it works and who it’s for

Since Clearbanc’s pivot from Uber and Airbnb, they focus on “web-powered businesses”. According to their website, that means:

The process for every company is relatively simple. You first have to meet their minimum threshold – Clearbanc typically only funds companies with $10,000 per month in revenue with six months of revenue history. It’s one of the ways they secure their investment, meaning that the platform won’t work for pre-revenue companies in most cases.

After you’ve confirmed your revenue, you have to meet their performance thresholds. So it’s not just about having money, but also what their AI-powered algorithm believes is good growth versus bad-fit growth. Of course, money is money, but at the same time Clearbanc is looking for positive unit economics, among other factors. However, with the data-driven approach, Romanow said Clearbanc funds eight times more women than the venture capital industry average.

Once approved, you get virtual access to a Clearbanc card that you can use to pay vendors directly. You can also upload your invoices into the Clearbanc platform and Clearbanc will pay them. Either way, you’re paying for your marketing and inventory with someone else’s money. So far, the model seems to be working: the Globe and Mail asked some Clearbanc clients about the process, and got feedback that the process in total took about eight days from application to money arriving (for context, bank loans can take three to six weeks or more).

The money is paid back on a revenue share model, meaning you pay a percentage of your revenues each month. In good times, your monthly payment is larger. But in bad times, it shrinks. It’s one of the ways Clearbanc hopes to be seen more as a financial partner not just a service provider. You pay back five percent of monthly revenues until the loan is paid off, including Clearbanc’s interest rate of six to 12.5 percent, depending on a variety of factors.

The financial sector is one of the oldest industries in the modern world, and some days it really shows its age. Clearbanc hopes to solve at least one major nuisance for business owners – funding marketing and sales spend.

The company has huge press at the moment on the heels of a $300 million dollar raise and endorsement by internet persona Gary Vee, but there’s still a lot to prove. As the company improves their AI model and continues to doll out capital, time will tell how the business model truly works. So far, skies are looking clear.